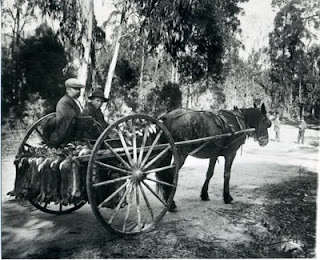 Isaac Walter Sidney was born in Bristol, England (circa 1857) and emigrated to the U.S.A. There he took up building as a trade although he described himself as a "skilled labourer" on his marriage certificate. He became an American citizen but later moved to Australia and Megalong where he purchased land neighbouring Donald Boyd's "Yaralta" (Parish Kanimbla Portion 25).

On Australia Day 1903, Isaac married Eliza Ann Campbell, described as a domestic servant from Hartley, at the home of Edgar Chapman, with the Reverend Pratt, Congregational Minister, officiating. Eliza had been previously married to a man by the name of Campbell but was known by her maiden name of Hunt. Eliza purchased land (Parish of Kanimbla Portion 170 & 166) and later her daughter, by her first marriage, Doris Fennell, took up land with Isaac and Eliza's son, and only child, Isaac Junior (Parish of Kanimbla portions 20 & 171). Isaac senior and Eliza built a pise cottage on their land which is still extant.

They were known as "poor" farmers as they had little stock. He did some building in the Valley and is chiefly remembered for his long and bitter arguments, for the British side, at the time of the Irish "troubles".

Eliza acted as the local midwife and was responsible for seeing some of the present residents of the Valley into this world. She died in 1943 aged 78, and is buried in an unmarked grave with her husband Isaac in Blackheath cemetery.

Isaac senior’s step daughter, Doris Fennell and her husband Harold, built a pise cottage near her mother and stepfather. She is alleged to have taken a stock whip to her husband, quite frequently, lashing him around the ankles, "because he moved too slow!". Harold died, aged 53, in May 1948 and Doris lived alone in her cottage until she too died in August 1960, aged 73. They share an unmarked grave in the Blackheath cemetery.

Isaac Walter junior (1905-1982), known as Ike, enlisted in 1942 and served as a private in ordnance during WW2; he married late in life to Esther Mildred Cox in 1957 and moved to Faulconbridge where he died, having sold the property to William and Joy Pringle in 1963 which is now named “Yapunyah”. Ike junior is also buried in Blackheath Cemetery in an unmarked grave.

Note on the photo: in the early 1900s Ebenezer Vickery of Kanimbla Station established a freezing works on Blackheath Creek to process rabbit carcasses which were transported to the railway at Mt Victoria for sale at the Sydney markets; it is said over 1 million rabbits were processed out of the Megalong Valley.

Thank you for this lovely story and background of my husband’s parents and grandparents. Some of your knowledge has been invaluable to my research about my in-laws. It is very much appreciated. Regards Frauke Ruth Sidney