Faulconbridge was the maiden name of Sir Henry Parkes mother, and the name he chose for his mountain property after he purchased land near Springwood in the mid-1870s.  The first house he built was given the name 'Stonehurst', the second and principal residence was called 'Faulconbridge House'. 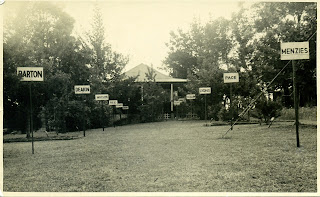 In the early 1870s, Parkes began to consider ways to unite the Australian colonies and in 1883 a Federal Council was set up to consider a Federal Constitution. Things moved slowly, however, and little more than discussion took place until 1889 when, with the encouragement of the Governor, Lord Carrington, Parkes entered upon a strenuous campaign for federation. This was the year of the famous Tenterfield address. Parkes' diplomatic skills in handling the often suspicious colonial governments led to a Federal Convention which met in Sydney in 1891 and to the drafting of a proposed federal constitution. The depression of the early 1890s slowed the movement down and Parkes did not live to see the first Australian Commonwealth Government sworn in on 1 January, 1901. He died in April, 1896 and was buried beside his first wife in the family's plot in Faulconbridge Cemetery. 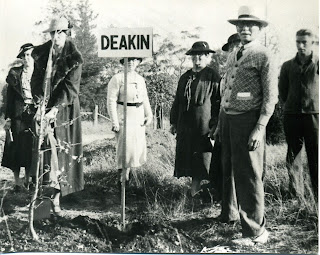 In 1917 the Parkes' residence, Faulconbridge House, was purchased by Mr Joseph Jackson (1874-1961), a businessman who was to become a long-time resident of Faulconbridge and the member for Nepean in the NSW Legislative Assembly from 1927 until he resigned in 1956. He possessed a keen interest in Australian History and was a great admirer of Sir Henry Parkes. 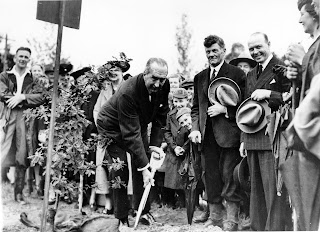 Both Jackson and his wife, Mylora, involved themselves enthusiastically in the local affairs of Faulconbridge and, in 1932, they purchased a parcel of land opposite their home and offered it to the Blue Mountains Shire Council for use as a park. Much of the early care of Jackson Park was undertaken by him and, in following years, he made several further donations to extend its area. 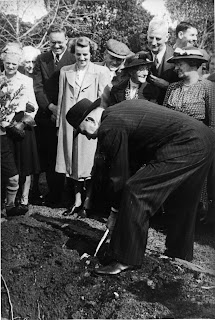 Having established the park, Joseph Jackson conceived the idea of inviting each of Australia's Prime Ministers, or their surviving relatives, to plant an oak tree there. A tree planting precedent had already been set in Faulconbridge when, in 1881, their Royal Highnesses Prince Albert and Prince George (later King George V) each planted a tree in the grounds of Faulconbridge House whilst breakfasting with Sir Henry and Lady Parkes. 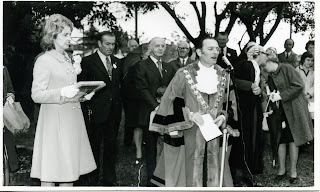 Jackson wanted to build on this precedent and envisioned, as the trees grew in size and number, a grand Avenue of Oaks forming opposite the home of the Father of Federation. This would serve, not only as a memorial to Sir Henry Parkes, but also to remind visitors of the importance of what had been achieved when Australia became a federation. 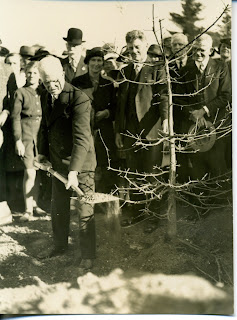 The first oak tree was planted on Wednesday, 12 September, 1934 by the then Prime Minister, the Rt. Hon. Joseph A. Lyons. 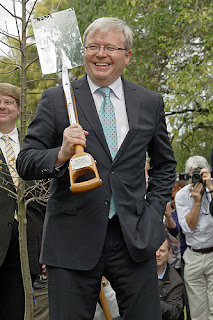 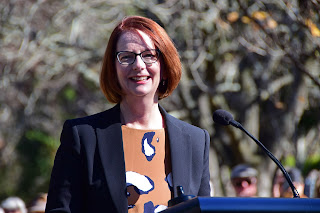 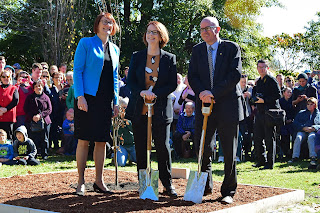 Up to July 2017, twenty seven trees have been planted.

The Hon. Alfred DEAKIN, by Mrs H. Brookes (his daughter)


*****
Images from top:
1. The Corridor of Oaks c.1940
2. Mrs HL Brooks, daughter of Alfred Deakin, planted her father's tree on 17 August 1936
3. Stanley Melbourne Bruce planted his oak tree on 4th March 1939. Next to him is Joseph Jackson (1874-1961) former Lord Mayor of Sydney, State MP and founder of the Prime Ministers' Corridor of Oaks.
4.  The Rt Hon Joseph Benedict Chifley, the former locomotive fireman and driver, knows how to handle a  shovel, 6th December 1947.
5. William and Sonia McMahon with Mayor Dash at the microphone, 22nd April 1971.
6. Our only red headed PM, until Julia Gillard, and first Roman Catholic Prime Minister - James Scullin founded the Commonwealth Literary Grants, played the violin, and was a lifelong teetotaler and non-smoker. Joseph Jackson MHR, founder of the Prime Ministers' Corridor of Oaks at Jackson Park, Faulconbridge, looks on, 9th September 1939.
7. Kevin Rudd shoulders the spade, 8th October 2012.