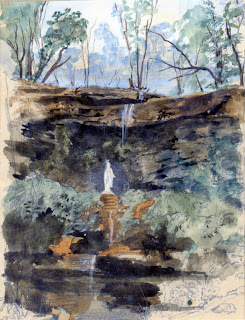 “From its earliest days in 1943, the Catholic Bushwalking Club fostered the idea of a shrine to Our Lady of the Way. In the Tenth Anniversary Catholic Bushwalker magazine, it is recorded that enthusiasm for the idea gained momentum when on Walk No 266a (on Sunday, 26th September, 1947) a beautiful grotto was discovered in Rocky Creek, a tributary of Katoomba Creek. In due course a special block of Carrara marble was imported from Italy on the order of Fr Coughlan (it was the same material from which Michelangelo’s famous ‘Pieta’ was sculpted) and a statue modelled on the fresco Madonna Della Strada was carved by Mr Osvath Imre at the premises of Mr T.H. Tyrrell, monumental mason at North Ryde. The work was completed in October, 1951.

The Lands Department indicated a willingness to grant permissive occupancy of the land in Rocky Creek but doubts were raised because of the possibility of vandalism. Other sites were explored and eventually a Club sub-committee recommended a grotto in Blue Gum Swamp Creek, Springwood, at the outer edge of the St Columba’s College property, then the minor seminary for students for the priesthood. The site was known to the students as St Joseph’s Bower.

Providence intervened when in August 1952, timber getters making a road through the bush in an effort to get timber out of Lynch’s Creek, mistakenly cut a road into St Joseph’s Bower. The Spring that followed was dry and Club members took advantage of the conditions to place the statue in position in the Grotto on 30th November 1952. It was officially blessed by Monsignor Duane on Sunday 27th September 1953 in the presence of a large gathering of Club members.

It is perhaps significant that the formidable task entailed in the planning for the installation and the actual installation of the statue at the Grotto involved a large contribution from the late Jack Murphy. After the tragic death of Frank Cooper in New Zealand early in 1955 and Jack Murphy’s in Glenbrook Gorge later in that year, plaques were erected at the shrine site (as it came to be known) in their honour.

After the installation, in September of every year until 1983, the Club honoured Our Lady with Mass at the shrine site followed by a picnic. By 1983 however, concerns were being expressed as to the safety of the statue: regrettably, the Club was spending little time each year in visiting the shrine site. A motion was put and after discussion it was passed, not without strong opposition, that the statue be removed from the site and transferred to a safer venue. The venue ultimately decided on was the property formally owned by Fr Coughlan, ‘Wooglemai’, near The Oaks.” (CBC, pp.38-40) 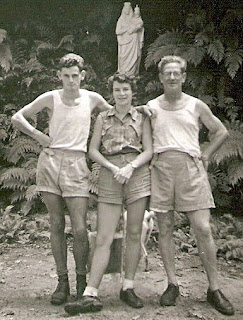 Jack Murphy
“Jack Murphy was killed in a climbing accident in Glenbrook Gorge on 13 November of the same year as the Mt Cook climb (1955), while training Club members in the rudiments of rock climbing and abseiling. The Sydney Rock Climbing Club (SRC) erected a plaque to his memory at the site of the accident. On Glenbrook Gorge walks, it is Club tradition to recite the Rosary when passing the plaque.” (Barrett, p.24)

Frank Cooper
“Sandwiched between these massive assaults on the South-West Tasmanian peaks, was a lengthy mountaineering tour of the NZ Alps, undertaken by Frank Cooper, Jack Murphy, Iver Pedersen, Hugh Smith and Jim Barrett. This mini-CBC enclave in New Zealand climbed throughout the South Island, but Jack Murphy and Frank Cooper joined forces to tackle the more ambitious peaks like Tasman and Elie de Beaumont. By mid-February 1955, they had climbed every 10,000 footer in New Zealand with the exception of the big one, Mt Cook.

In the deteriorating conditions of late summer, it took them five days via the Hooker Glacier to reach the Empress Hut, the highest climbing hut in New Zealand. Three more days were spent weather bound before the weather cleared, and on 25 February 1955 at 0245 hours, they left the hut in clear weather to commence the climb of the three peaks of Mt Cook. The top of the mountain comprises three ‘Summit’ peaks The Low Peak, Middle Peak and High Peak ‘the highest mile in New Zealand’.

When they reached the High Peak the wind had freshened and a hog’s back (a distinctive cloud formation which is bad news to the New Zealand climber) was forming. Waiting only to eat a handful of scroggin, the pair set off on their homeward route, reaching the Low Peak around noon; the wind was now very strong indeed. On the descent to the Empress Hut, cloud rushed up from the Hooker Glacier and it began to rain.

In the poor visibility, they mistakenly entered a gully which they had not ascended. With only 500 feet to go, they slipped on snow-covered ice. Frank was killed in the fall and Jack suffered back and head injuries as well as breaking his wrist but he managed to dig himself out. Due to his injuries, he could not dig down to his friend. After a great effort Jack managed to reach the Empress Hut. After a traumatic few days alone in the hut, he was eventually rescued by the guides from the Mt Cook Hermitage.” (Barrett, p.23)


*****
Photos:
Jim Kohlhardt, his cousin Alison and her father Howard Roper taken about 1956 in front of the Catholic bushwalkers' memorial. Photo from Frank Hawkes.