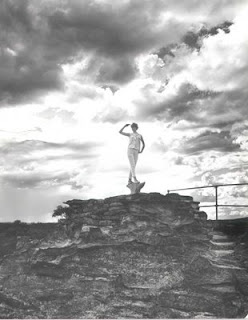 Anvil Rock is a weathered sandstone rock formation, situated on the top of the cliff line above the Grose Valley. It is accessed by Hat Hill Road, Blackheath that runs north along Anvil Ridge. At 900m before Perrys Lookdown there is a left hand intersection and 500m along this is the Anvil Rock car park.

Anvil Rock was so named as this rock formation resembles the shape of an anvil. The Rock is a popular location for overseas tour groups as the local road to this site allows an easy and short walking access to one of the best views of the Grose Valley. Blackheath Council had named this rock formation, Anvil Rock in 1938 - the same year that an access road was constructed to this picnic area.

In 1948 an anvil was donated by Stan Miller, Company Secretary, Bradford Kendall Industries Pty Ltd. Stan was an ardent bushwalker and used to take his holidays at Blackheath. The anvil was a standard size manufactured by this company and made at the Number 1, Botany Plant, 340 Botany Road, Mascot. After the anvil was placed at Anvil Rock the company appointed a Custodian of the Anvil in the person of Mac McCarthy, paymaster of the Botany Plant and resident of Leura, (he used to travel from Leura to Botany every day). He continued his role as custodian for a number of years. In the 1950s a brass directional plate was made and attached to the anvil.

Sometime in 1970 that the anvil disappeared, probably pushed over the cliff.

Local historian and author Brian Fox interviewed Kevin Browne, a former National Parks Ranger on the 26th August 2001, who had this to say:

The anvil was carried to Anvil Rock on a stretcher type construction by four people owing to its weight. Jack Grady and Ted Smith were two of the people carrying it. (Kevin could not remember the other two) about 1940. Jack Grady at the time was a council worker.

Geoff Bates, another local historian had mentioned that the Police Rescue Squad conducted a training day (no date given) at Anvil Rock with the intention of looking out for the anvil, but it was not located.

On the 26th February 2005 the Police Rescue Squad had the unpleasant task of conducting a body recovery at the base of Anvil Rock. Through the local grapevine Brian was informed by David West and Peter Rickwood of Blackheath that during the recovery the anvil had been located.

On Saturday 21st May 2005, Brian and his brother John walked in to the base of the cliff and finally located it. The anvil was lying at the base of a tree which had stopped its fall.

The anvil had remained completely intact despite being dropped onto sandstone from a height of 300m. This was no surprise as, being made of hardened steel; it had been designed to be pounded with a blacksmith’s hammer. It was light grey in colour and inside an ellipse was engraved the letters: “BK/Sydney/Aust” and below that “6 CWT”. This denoted the manufacturer, Bradford Kendall, where the anvil had been manufactured and its weight (672 lbs or 305 kg).

In 2008, thanks to a joint effort by NPWS, Blackheath Rotary, local police and community members, the anvil was retrieved, restored and re-bolted to the Rock.