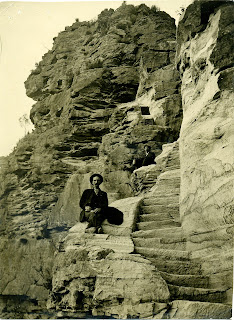 First Steps
At 540 metres in length, with 911 steps hewn from the cliff face and 32 steel staircases, the aptly named Giant Stairway drops almost 300 metres to the floor of the Jamieson Valley below the Three Sisters. At the official opening in 1932, the Newcastle Morning Herald saw it as a "triumph of nerve and skill", while the Sydney Morning Herald concluded that "patience and courage have had their reward".

Such comments, made in relation to the official opening of both the Giant Stairway and the Projecting Platform at Echo Point on Saturday October 1, 1932, were among many offering tribute to Ranger McKay, the man who almost two decades previously had conceived the idea of a track linking the cliff top at Echo Point with the Federal Pass below.

James Henry McKay was born in Balmain on December 4, 1869 and died in Katoomba on September 12, 1947. He appears to have been the third ranger employed to care for reserves in the Katoomba area, following in the steps of John Smith and Charles Deeves. His appointment as Chief Ranger in 1901 came a year after the opening of the Federal Pass, which traversed the valley floor between Katoomba Falls and Leura Falls, an event representative of a new phase in the leisure use of the Blue Mountains. Gaining full time employment with Katoomba Council may have also helped Jim McKay make up his mind in 1902 to marry Emily Cole, a twenty year old widow and mother of four, and have six more children; William 1903, Letitia 1904, Isabel 1908, Dorothy 1910, Edna 1914 and Laura 1921. Emily’s daughter Ruby Cole, born 1901, was killed in Katoomba in 1910 by a kick from a horse; her father Henry Cole had died in a fall from a horse outside the Katoomba Railway Hotel in 1902. Both were attended by Dr John Spark; Henry and Ruby Cole share an unmarked grave in Katoomba cemetery.

Prior to 1890, the development of the Blue Mountains bushland for the benefit of visitors had been concentrated primarily on the cliff tops - constructing lookout access to the most popular views. The 1890s and early 20th century saw interest moving downwards into the valleys with the emphasis placed now on the active enjoyment of walking. Track-walking remained the primary motive behind the development of the area for leisure until the 1930s, when the motor car, speeding from sight to sight with its cargo of ‘sightseers’, revolutionised tourism and re-directed attention once again to the cliff edge. Indeed, Echo Point, with its Giant Stairway down into the valley and its Projecting Platform looking out over the valley, could be said to represent both the end of one era and the beginning of another.

It was from the Dardanelles track that, in 1914, he conceived his idea of a new pass that would junction with the Three Sisters at Echo Point. Scoffed at initially, his project eventually received Council approval in July 1916 following an all-day inspection of the reserves by the Reserves Committee (Aldermen C.L. Dash, G. James, G. Davies and R.V. Smythe), In their report to Council, they recommended "that it be left in the hands of Chief Ranger McKay to construct a new track from the vicinity of Echo Point to connect with Federal Pass at a point below the Three Sisters". Council adopted the report and the work began under the direction of McKay, his assistant Walter Botting and their team of labourers, which included Reubin Esgate, father of the noted Mountains identity Ben Esgate.

An article in the "Blue Mountain Echo" in 1916 reports that McKay "took to the work from the first" and with a dedication few could match today. On one occasion, the writer asserts, his wages were eight months in arrears and he survived only on large credit accounts with local stores. Before he began work on the Giant Stairway, the Federal Pass had 1,764 steps, 500 of which were in reasonable condition. By 1916, McKay had increased this to 6,464 steps, including a new track from near Bull's Head, which skirted the cliffs and led to the top of the Leura Cascades and he planned and opened the Dardanelles section of the Federal Pass. In 1908 he had led the construction of the Furber Steps, his first great stairway into the Jamison Valley.

Delay... then renewed interest
After proceeding for almost a quarter of the distance, however, the work of hacking the steps from the sheer cliff face was deemed too costly by Council and the project was brought to a halt in August 1918 and in 1922 Council's Chief Engineer estimated that a further 300 steps needed to be cut. The whole idea then lapsed for over a decade.

In the early 1930s, Harry Phillips, the noted Mountains photographer, published a small pamphlet outlining his suggestions for the future tourist development of Katoomba. Among these was the completion of the Giant Stairway which, he argued, "Can be completed at a small outlay; it leads directly into the most prolific and prettiest Fern Glen Forest in the Jamieson Valley, Leura, where magnificent motor tracks and camping areas can and should be, opened up immediately." Following vigorous agitation on the part of Alderman W.C. Soper, a close friend of Phillips, a renewed interest in the scheme was awakened early in 1932. A motion put before Council by Soper was passed and work, again under the control of Chief Ranger McKay, recommenced. This proceeded with sufficient speed for a decision to be made in July to arrange for the official opening to take place on the first weekend of October. An extensive publicity campaign under the direction of the Town Clerk, Mr. F.C. Taylor, was set in motion, circularising the provincial and city press, various radio stations and arranging with Cinesound to make it, as the Katoomba Daily put it, "a boost day for Katoomba". 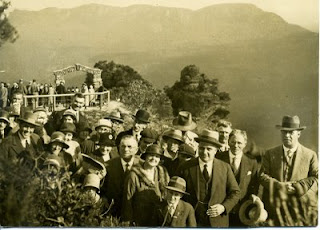 Official Opening
The official opening duly took place at 3.30 p.m. on the Saturday of the Eight Hour Weekend. Following the speeches of welcome by the Mayor Alderman A.E. Packer, and the local members of Parliament, Hon. J. Jackson, Minister for Local Government and Mr. J.N. Lawson M.H.R., The Premier of New South Wales, the Hon. B.S.B. Stevens, responded and declared both the Giant Stairway and the Projecting Platform open. In his speech, the Premier paid tribute to those who carried out the hard physical work, work that on occasions was so dangerous that they had to be roped to prevent them falling. He praised their skill and courage and assured them that "they will always have the satisfaction of knowing that their initiative and labour will bring pleasure to countless thousands in the years to come", and to "have shaken the hand of Chief Ranger McKay made this a memorable day".

The ceremonies over, the huge crowd witnessed an exciting exhibition of rock-climbing by three members of the Blue Mountaineers Club: Dr. Eric Dark, Mr. Osmar White and Mr. Paddy Ellis.


"These intrepid mountaineers first appeared on the sheer wall of the western precipice about 4.00 p.m. and quickly ascended 500 feet of cliff face to the summit of the Second Sister, where the Australian Flag was flown. The descent proved even more spectacular and although the climbers did not take any unnecessary risks, and were on no occasion in danger of falling, many of the spectators literally held their breaths as they witnessed the amazing ascent of the beetling crags". (Katoomba Daily).

While the motor car was ushering in a new era of leisure activity in the mountains, which reduced somewhat the popularity of walking tracks, the Giant Stairway, though perhaps representative of this earlier phase, has, with its panoramic views and as a companion to the Scenic Railway, survived as a popular tourist attraction for the eight decades since its completion. As a memorial to the work and vision of Chief Ranger Jim McKay, and others like him, its value to the Blue Mountains is even further enhanced. 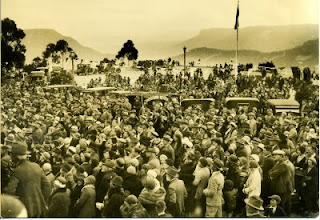 Photos
Top: Chief Ranger Jim McKay poses on the Stairs with his assistant Walter Botting (Harry Phillips photo).
Second: McKay with workers, showing use of picks, hammers and chisels to cut back rock prior to step making.
Third: The official party, The Premier Sir Bertram Stevens 4th from right, the man in the bowler hat at rear is Percy Wilson, President of Blue Mountains Shire.
Bottom: The crowd at the official opening, Echo Point.