Many visitors and local people have fond memories of the flying boat at Catalina Park, a natural amphitheatre to the west of Katoomba. Although officially named Frank Walford Park, it has more recently been called by its earlier name The Gully. In the mid-1940’s this area of bush, swamps and springs was largely undeveloped and home to a small settlement of Aboriginal and non-Aboriginal people.

The land was owned by Horace (Horrie) Gates, owner of the Homesdale Guest House with its Wentworth Cabaret nightspot. In 1946, he felt that a new attraction was needed to bring tourists back to the Blue Mountains after peace was declared. Accordingly he dammed Katoomba falls creek to form an ornamental lake where he constructed an amusement park offering ‘every facility for fun and food’.

The park was an instant success and in 1948, the shell of a Consolidated Catalina PBY-5 flying boat was added to the attractions, which included speedboat rides, tearooms, miniature train, Ferris wheel, merry-go-round, swimming pool and a Giggle House showing Charlie Chaplin films. Although many people believed the plane had flown there, it had in fact been dismantled and brought to Katoomba by truck, where it was re-assembled and anchored to a concrete block in the middle of the lake.

Up to thirty passengers paid two shillings to be taken out to the flying boat by punt where in the dark, stuffy interior, they viewed film of a flight over the Sydney area, heard the story of the Catalina and tried out the controls. While the film was showing, an assistant would stand on the wing rocking the plane to simulate flight while the speedboat would circle the lake providing waves and engine noise. Fun seekers emerged from this sensory experience dizzy and gasping for air, many too ill to enjoy further amusements.

For many years the lake operated as Katoomba’s swimming pool and provided a fireworks display after the New Year’s Eve street parade. However as the town’s population increased, it became run down, its reputation unsavoury and its water polluted.

Council purchased the land in 1952 with the purpose of turning the area into a public park and treated water swimming pool. In 1954 the Catalina aircraft, showing signs of age and wear, was pulled up onto the bank and left to the ravages of weather and souvenir hunters. Around 1958 it was sold to Sheffield Welding & Engineering, Auburn NSW, who dismantled and cut it up for scrap.

Blue Mountains Council accepted proposals for a racing car circuit in the park and clearing commencing in 1957. By May 1959 the shacks of the last Gully residents were demolished to make way for the Catalina Race Track that officially opened in 1961. A new Olympic Pool was opened adjacent to the original swimming pool in 1972. In 2003, the Katoomba Indoor Sports and Aquatic Centre opened on the site where a new generation of fun seekers relax in the heated spa in place of the murky water and tadpoles. In 2005, the Gully was declared an Aboriginal Place. The original swimming pool with a wire netting and cement shelter still exists, serving mainly as a duck pond and for water loving dogs.


I found your blog when I was looking for a different sort of information but I was very happy and glad to read through your blog. The information available here is great

I went up there yesterday and wondered what happened to the Aboriginal people who were forced out.

Walter Henry Bone was born at 52 Crown St Sydney in 1863, his father was Robert Bone, printer, aged 30 of London; his mother was Sophia Mar... 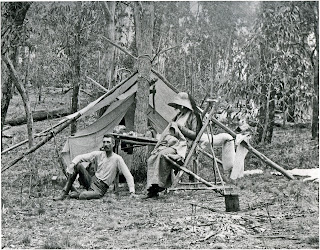