“The Allies”, said the editor of the Blue Mountains Echo of 13 August 1915, “can make no further progress in the Dardanelles until reinforced with troops. Our own men there are calling for assistance.” One response to the desperate need for reinforcements originated in Gilgandra in October 1915 with 26 men, the brain wave of local plumber WT (Bill) Hitchen, captain of the Gilgandra Rifle Club and his brother Richard. The Coo-ee March was the first of many privately organised recruiting marches of the time, which gathered recruits as they progressed and became known as snowball marches.

As the march wound its way to the Sydney Domain through country towns and villages with names such as Wongarbon, Mumbil, Boomey and Yetholme, the recruits were decked with roses and treated to lunches of roast lamb and plum pudding. After ascending the western side of the Blue Mountains via Berghofer Pass, they reached the Explorers’ Tree at Katoomba on 5 November, where, after taking refreshments, the mayor and local butcher, Alderman George James, welcomed “the boys from the western plains”. The recruits responded as one with their rousing Coo-ee war cry and wearing their new blue dungaree uniforms and white canvas hats, marched into Katoomba to the accompaniment of the Leura Brass Band and the cheers of locals from footpaths and balconies, “streamers and brightly coloured bunting arched the principal thoroughfares and many public and private houses were gaily bedecked.”
After further speeches of welcome and loyalty at the official dinner at the California guesthouse that evening, Alderman Tabrett proposed the toast to “Our Boys at the Front”, declaring “the whole world would ring with the praises of the Austral heroes who were ably defending the liberty of the world. We want thousands more like you”, he told the Coo-ees, “I sincerely hope Australia will always be noted for its workers and not its shirkers.” The recruiting rally after the dinner was one of the “biggest meetings ever seen in Katoomba”, at which “no less than 21 recruits offered and were accepted”, reported the Echo. The Katoomba Red Cross Comforts Fund presented the Coo-ees with a bale of socks knitted by local ladies, including ten pairs from the industrious Mrs James, the Mayoress.

At Wentworth Falls, a road worker downed tools and stepped into the ranks to rousing coo-ees from the men, although his two mates decided “to think it over”. At Lawson they were addressed by the Governor General and ten new recruits were welcomed to the ranks.

The Coo-ees entered Springwood on Monday morning 8 November through the smoke from nearby bushfires and bearing their banner with the motto “First Stop Berlin”, accompanied by an escort of four mounted policemen, a piper playing stirring highland marches, a squad from the Springwood Rifle Club and cheering school children. “Hitchen’s Own” then made camp on the Homedale Estate.

A thousand people from Springwood and surrounds attended the evening open-air concert and recruiting meeting where more young men joined up. A local reporter wrote: “How well Springwood entertained is best told in the words of a lady who helped, ‘It was the biggest wash-up that I ever heard of,’ she said, and that is saying something coming from the sex that reckons life is one wash-up after another.” The next morning at nine o’clock, with the piper again in attendance, the Coo-ees marched out of town.
The 263 Coo-ees who reached Sydney on November 12 went into action on the Western Front, in particular the Albert, Pozieres and Mouquet Farm battlefields. Some never returned and now lie with their comrades somewhere in France, a number were decorated for bravery. The bible on which five Springwood recruits were sworn in is held in the Local Studies collection at Blue Mountains City Library.

Images are from the Local Studies Collection.

The original Rotary Town Clock and arch with marching girls and band during the Woolfiesta parade, April 1963 Beginning in 12th century Euro... 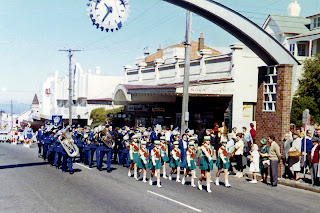