The Sydney Rock and its Environs

The current widening of the Great Western Highway is bringing home to us the engineering challenge of the transport corridor along the narrow east-west ridge of the Blue Mountains. How much more, when there was none of the earthmoving machinery to be seen today! These difficulties are highlighted by the work that is about to begin midway between Hazelbrook and Lawson with the re-routing of the railway and road to the north of Sydney Rock. 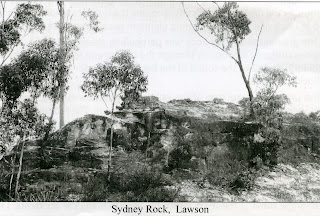 Sydney Rock was long recognised as a prominent landmark along the highway. Brian Fox in his Blue Mountains Geographical Dictionary records its recognition as early as 1882 and its being named Sydney Rock in guide books and newspaper reports from 1903. It was regularly listed as a tourist feature, which commanded a fine view of Sydney and of the intervening bushland. The Souvenir of 1903 records that ‘residents appreciate Mr Geggies’ prompt act in saving Sydney Rock from the vandals who had begun to blast it out for road metal’. In the 1940s I remember it as a popular picnic spot and a playground for us children. During the war one watched the searchlights waving across the Sydney horizon and the fireworks at the war’s end. In recent years increasingly heavy traffic on the highway has virtually closed access to the rock and tree growth has hidden it from view of passing motorists.

Three Aboriginal sites have been recorded in the neighbourhood, including rock shelters with deposit, axe grinding grooves and rock engravings. The Rock itself shows no sign of Aboriginal activities, but it could well have been a place with a story. The North Lawson Ridge, now traversed by Queens Road, shows signs of religious significance for Aboriginal people (Stockton 2009: 16-20, 46-7). For Gundungurra people travelling there along the main ridge Sydney Rock could well have served as a marker for turning north along this ridge.

The environs of Sydney Rock show signs of the original railway construction in the 1860s. The Sydney Morning Herald of 4 November 1868 carried a glowing detailed report of this engineering feat, described as ‘certainly the most remarkable in the Australian Colonies’. The railway from Sydney was constructed and opened to public use in stages: Parramatta 1855, Blacktown 1858, Penrith 1862, Weatherboard 1867, Mt Victoria 1868. Work on Section No.2 between Welcome Inn and Blue Mountain Inn, carried out by Messrs Duxberry and Kerr, was described as ‘very heavy, the line being carried alternatively along the ridges and round the spurs of the hills. The cuttings through hard sandstone rock (Hawkesbury Sandstone), and the embankments, are numerous, and some of them very large. One of the cuttings is 51 feet deep and required the removal of 33,000 yards of earth. The section is full of steep gradients and sharp curves; the steepest gradient being 1 in 33 and the smallest radius of a curve is eight chains’. This section required the construction of two bridges ‘in masonry’ to carry the road over the railway, and 61 culverts. 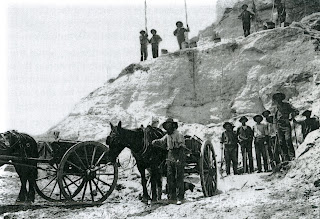 The cuttings and embankments, which we now take for, granted were the result of heavy manual labour. Mark Langdon has described it for me as “a combination of strong arms and blasting powder” (this was before the invention of dynamite or gelignite). He goes on to explain: “Three man teams would drill holes for blasting powder, with one man holding a drill and the other two taking turns to swing sledge hammers, between each blow of the hammers the man holding the drill would turn it a quarter of a turn. Once the hole was to the required depth it would be filled with blasting powder and the working face then shattered by the explosion. The working face would be formed by a series of benches, with the spoil being shovelled from one bench to another and then into tip drays, which would carry the spoil away to form the embankments”.

The transverse ridges between Woodford and Lawson, along the north-south Tomah Monocline, required exceptionally deep cuttings and at first tunnels were planned at these points. However the shortage of filling in such rocky country, almost devoid of soil, necessitated the substitution of 50 feet cuttings so that the spoil could be used on the intervening big embankments. Where the road crossed the rail line at these deep cuttings (at Linden and through Sydney Rock) stone arch bridges were provided (Wylie and Singleton 1957:165-6).

In the 1890s attempts were made to alleviate the sharp curves in the line. In 1897 there was a 44 chain curve improvement near Sydney Rock. A curve of 8 chains radius with adjoining flatter curves was replaced by a single transition curve of 12 chains radius (Wylie and Singleton 1957:165-6). The line was duplicated in 1902 with the widening of the original cuttings. The same methods were employed. However the later deviation of the line between Emu Plains and Valley Heights (1911-12) saw the first use of steam shovels (‘a Steam Navvy’).

The ruling gradient up to Katoomba of 1 in 33 proved too steep for the steam engines of the time and a second engine had to be attached to assist passenger and freight trains up the ascent. At first this was done at Penrith and later at Valley Heights after the construction of the Depot there in 1914. There were instances of descending trains running out of control in the 1880s, with a particularly serious accident on 22 March 1886. After leaving Katoomba the driver had difficulty stopping the train at stations until it finally collided with buffer stops at a dead end at Lucasville platform, injuring eighteen passengers (Langdon 2006: 23-5). 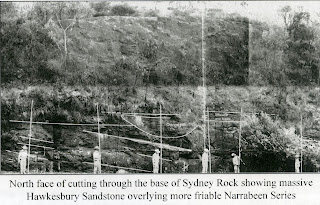 The gradient at Sydney Rock was particularly steep, at 1 in 32, and I remember as a child listening to steam engines chugging laboriously through the cutting and feeling the vibrations through our home nearby. Ken Ames (1993:99) describes the sound of the big three-cylinder locomotives (57 and 58 class) as similar to saying slowly ‘a bucket of bolts’. The proposed re-routing of the railway, with a new cutting, north of Sydney Rock offers the opportunity of preserving the relics of the original pioneering work. The redundant cutting immediately south of the Rock has its southern face resulting from the original work of 1866-7 and the northern face the result of the 1902 duplication. It would be interesting to compare closely the marks left on the two faces. The large embankment east of the cutting gives a good idea of the scale of the work undertaken with basic tools and manpower.

The existing old bridge over the railway, now used only by pedestrians, is a concrete Monier arch bridge built in 1902. It replaced an earlier bridge with the reduplication of the railway line. Monier arch bridges were commonly constructed between 1897 and 1914 as railway overbridges. Crossing the line squarely necessitated two sharp right-angle turns in the road, which resulted in many car accidents. I have known at least four fatalities in the last seventy years. Near the north-western corner is the concrete pedestal base for a beacon light. In the 1920s flashing lights, powered by gas, were used to warn motorists of sharp curves ahead in foggy weather. 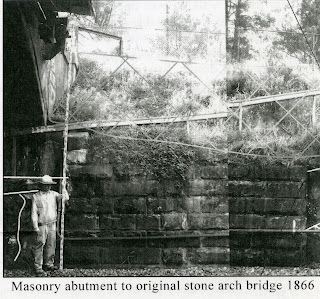 Below the old bridge on the southern side can be seen the remains of a masonry abutment, consisting of 8 courses of squared sandstone blocks with drafted margins. This would have been part of the original bridge over the 1866-7 railway cutting, an arched sandstone structure - one of the two ‘in masonry’ mentioned by the Sydney Morning Herald, between Blaxland and Lawson. Three of the 61 culverts of this section occur nearby. These were solid constructions of large sandstone blocks, but one is faced by a brick arch.

The re-routing of the road and railway north of Sydney Rock leaves redundant not only the old cutting, but also railway property to the east and south. It is proposed that this small area, dominated by Sydney Rock and rich in railway heritage features, be turned into a reserve. Sydney Rock would be restored to its former prominence, ‘our own Uluru and part of the cutting be left exposed to show its 1867 and 1902 faces. It is recommended that the western facade of the 1902 bridge and the 1867 masonry abutment at its base be left to view. 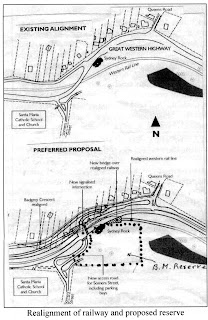 The area has further educational value in its geology and botany. These have been detailed by the author in the Hut News, March 2010 (Blue Mountains Conservation Society). Sydney Rock is the western most bastion of Hawkesbury Sandstone and the stratigraphy of the cutting shows clearly how it overlies the more friable Narrabeen Series of shale and sandstone. Nowhere have I seen the contact between the two so clear and accessible. It is well recognised that railway land often preserves remnant bushland, long free of disturbance and grazing. A botanical survey by Judy and Peter Smith in 2007 has revealed a rich diversity of native vegetation communities and plant species, some quite rare and of special conservation significance.

The support of the Blue Mountains Historical Society and other like-minded bodies is being sought to urge the Blue Mountains City Council, negotiating with the RTA and SRA, to have this small area declared a history and nature reserve.