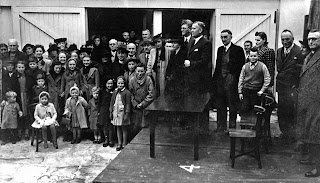 
“Boys’ and Girls’ Library and Craft Club Nearing Completion
Most mothers have had, at some time, to cope with a complaint from their children that there is nothing to read or nothing to do. This particular problem should be solved by the establishment of the Katoomba Boys’ and Girls’ Library and Crafts Club, which is an offshoot of the Children’s Library Movement, founded many years ago in Sydney, by Mrs. Mary Matheson.

Situated in Davies Lane in what was, until a couple of months ago, an ugly asphalt yard, flanked by a row of ugly dilapidated garages, the new library is growing towards completion. Thanks to much generous voluntary work, the asphalt has given way to a stone crazy pavement; the garages, altered and renovated, wear a fresh coat of paint in cream and pastel colours; shelves of a height suitable for small people, area already well stocked with books; and what was once only a rubbish dump waits only for the Spring to become a garden.

The establishment is thus an accomplished fact – but development must take place slowly, depending at first mainly upon the library; but by degrees with the co-operation of parents and of the children themselves, it is hoped that various crafts such as carpentry, pottery, basket-making, bookbinding, etc. will be taught. Later, when funds permit the purchase of a piano, community singing and dancing will have their place, and children interested in painting, drawing or writing will be encouraged to exercise their talents.

The object of the Children’ Library Movement, however goes beyond the mere lending of books and teaching of crafts, and aims at providing for children a place which is “theirs” – a place pleasing to the eye, friendly and informal in atmosphere, where they can spend their leisure hours in absorbing and creative occupations.

Those interested in the movement feel that in time of war such a place becomes not less, but more necessary for children, as a psychological counter blast to the atmosphere of strife and destruction which prevails, and which children unconsciously absorb.

In Sydney the Phillip Park, Erskineville and Surry Hills centres have functioned with great success. It is hoped that because of the great influx of children which Katoomba has seen in recent months, not only our own residents, but long term visitors also, may recognise the usefulness of the centre and extend it a generous support.”
The Blue Mountains Advertiser, Friday July 3, 1942.

A cordial invitation is extended to all townspeople to be present.

For many weeks past, a band of willing workers has engaged in transforming a row of brick garages into neat and comfortable quarters. The transformation is almost unbelievable.

In addition to the library, provision had been made for instruction is arts and crafts.

The fact of the minister consenting to perform the official opening is proof of the value of the movement and it is hoped to see many parents present.

The appeal to the children goes without saying."
The Blue Mountains Advertiser, Friday July 2, 1942. 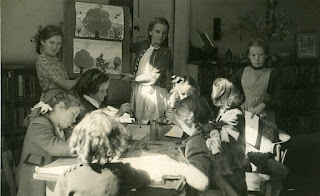 Children showing their work in the art class

Speaking as above, and in the presence of a representative gathering, the Hon. Clive Evatt, Minister for Education, officially opened the Katoomba Children’s Library in Davies Lane, on Saturday afternoon.

Many people who viewed the premises for the first time were impressed by the transformation, and there was unstinted praise for all those whose voluntary labours had contributed to this result. The Minister, Mr. J. Jackson, M.L.A. , the Mayor, and others associated with children’s educational movements , expressed themselves in such terms.

Dr. E.P. Dark (chairman) in introducing the Minister, referred to this able administration (and the elimination of the cane), his interest, in music and cultural movements generally. “Some people believe that it is wrong to spend money during war time on a movement such as this,” he added, “but that is short sighted viewpoint, the war must not be allowed to interfere with the child’s mental development.”

Ald. Freelander (Mayor) in welcoming the Minister pointed out that it was his first official visit to Katoomba, and Mr. J. Jackson, M.L.A., ably supported his words of welcome.

Mrs. Matheson, (founder of the Children’s Library Movement), traced its development since 1924. There are now eight such centres in N.S.W. and public interest has quickened considerably in the past three years. Springwood is one of the centres where a library has been established. Mrs. Matheson paid a special tribute to the work of Mr. B. J. Milliss, whose vision and courage, she said, was largely responsible for the founding of the movement at Katoomba. She acknowledged the part also played by Dr. E. P. Dark. 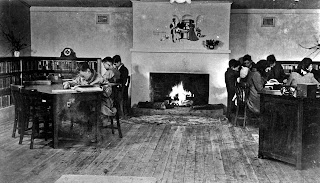 Interior of the library, the mural above the fire place
depicts William Caxton with a printing press 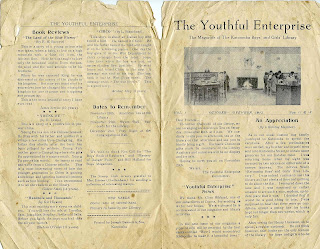 The Youthful Enterprise
Magazine of the Katoomba Boys and Girls Library

Workers Praised
Mr. B. J. Milliss referred to the financial angle, and appealed to well-wishers for subscriptions to enable the supply of library books and materials for arts and crafts to be maintained. He stated that a sum of ₤350 in hand had been augmented by subsequent donations exceeding ₤30. The weekly rental was ₤1 per week, plus an outlay of about ₤4 per week for expenses. He spoke highly of the voluntary work of the following whose names appear on a brass plaque affixed to the building: Charles Smith, Hector Martin, Wally McGown, Harry Hammon, Keith Collins, Wally Weedon, James Ledger, Harvey Clark, George Barker, Frank Spicer, John Tomlin, Tom Butterfield; Dahl Collings and Elaine Haxton (artists) and Evelyn Bowker and Pat Seitz, who assisted them in the decorative work.

The Hon. Clive Evatt, who was warmly received, dealt at some length on the education of the children, and the responsibilities of the young people in helping to shape the better order of things which is to come. It was his view, he said, that the work of education must not be diminished because of the war; but, on the contrary, be greatly increased. This year the Education Department was expending six million pounds (a record); but he could easily spend double that sum.

The Better Tomorrow!
“The war is being fought largely for the children of today,” he continued, “in order to set up a new way of life. We all want to see a wonderful change in conditions, and children of school age will play an important part. The work of education must go on undiminished; we must keep striving for the improvement of the child physically, academically, culturally and spiritually… I want to see children grow up into a world that will be characterised by real equality and justice, economically and socially; where there will be no depression and unemployment and social injustice... this aim can be helped by education in its broadest sense, by leading people out of darkness into light, out of illiteracy into knowledge.”

The Minister drew a comparison between expenditure on cultural affiliations and the millions of pounds a day expended for the destructiveness of war. He referred also to the way Schools of Arts libraries had died out, and suggested that these too should have catered for the child mind.

The yearly grant of ₤250 to the Children’s Library Movement has been doubled by the Minister, and he expressed the hope that he would be able to continue such increases.

The ceremony ended with the unveiling of a commemorative tablet.

Among those present were the Revs. J.R. Le Huray, L.C.H. Barbour and A.E. Putland.” 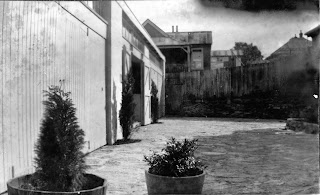 Exterior view of the Library and courtyard
"LIBRARY CENTRE AT KATOOMBA
After the Minister for Education, Mr. Evatt, had opened the Katoomba Boys' and Girls' Library and Crafts Club on Saturday afternoon, children stayed to read books beside the library fire. The club, which is the eighth centre of the Children's Library Movement, is built from six disused garages, which have been converted into one central library, opening into two craft rooms on either side. It features murals designed by Dahl Collings and Elaine Haxton. Those present at the opening included the president of the local auxiliary, Dr. E. Dark, and Mrs. Eleanor Dark; the Mayor of Katoomba, Alderman Freelander, and the organising secretary of the Children's Library Movement, Mrs. Mary Matheson."
SMH Monday 27 July, 1942